excerpt from Patient is love:

He will have to find his own way
To the river.

excerpt from To Love a strong woman:

He could not bear losing her love
But it was already too late
Love had begun.

excerpt from A Human encounter:

Let’s build something together.

I started my poetry blog “Nomzi Kumalo, What Are You Waiting For?” because I did not know how else to get through what I was going through, sober. This was 6 years ago, today.

I had buried my dreams so deep inside of me that life eventually shook me so hard, to the point of surrendering my written words to you. This daily practice became my way of opening my heart and remembering the way to my dreams.

Do not underestimate the power of writing down your own words. The daily practice will positively impact different aspects of your life. Start writing and gathering all the thoughts that you have written throughout the years. Speak into a voice recorder. See what happens.

Got my first ever release concert, 26 February 2020 at Herr Nilsen, in Oslo.  It will be cool to see you, so come and say hello. Buy your tickets by clicking below.

Also, my poetry book is marinating and I can’t wait to get it ready for publishing and share it with you. In the meantime, please feel free to connect with me to build something by clicking below. Thank you for being here. Thank you WordPress. Love always, Nomzi ❤️🥰💖🌸🌺💓🥳❤️🥰❤️💓

Buy your concert tickets here
Connect with me here

It has been a whirlwind of a year in music and I will always cherish and remember you because this is where it all started. The benefits of blogging far superseded anything that I could ever have imagined!

My first single, “The Truth”, is out on all platforms!!! CLICK on the red link below to hear it! The song is about how I did not want to take responsibility for my own decisions so I filled up my life with people and things that literally muffled my senses. “The Truth”, lyrically speaking, is me having a date with myself, waiting for someone to show up to save me from my miserable life. But nobody is coming to save me. Because it is me that has to show up.

This life is not a dress rehearsal. No, no. So I urge you to have mercy on yourself and forgive yourself. Start there. There is nothing inside of you that is too dark and too ugly for you to face. And should you need a helping hand to do so, reach out to someone. Talking with a professional might also be the key to unlock the blockage. Take a leap of faith! You see, we were never meant to be here to do this alone.

I am forever grateful for you. Your presence and support means the world to me. Happy holidays!!! 🌺🌺🌺 May 2020 be your year of good health, love and good fortune!!!

Official Website. First single THE TRUTH is out on all platforms! Join NomziKumalo.com. Photo: Nabeeh Samaan.

The South African born, Norwegian-based artist, Nomzi Kumalo, celebrates 7 years sober by releasing a critically acclaimed début single under her own record label, Kumalo Records. Six-time Grammy winner, producer and audio engineer, Brian Vibberts wrote, “WOW! “The Truth” is so honest and heartfelt. A great vocal performance with an emotional impact!!!” when he heard it.

“The Truth” premiered on South Africa’s national urban and contemporary radio station, Metro FM, the night before it dropped. Surprising listeners with her first ever live interview, all the way from Oslo, by none other than the South African media icon, Nothemba Madumo. It also premiered in Norway, with her first Norwegian radio interview by Ole Sven Engelsvold, on NRK P2. The reception of her song is immense, as she keeps up with her record label work, interviews and preparation for her Norway Tour 2020, as well as new releases.

Writing poetry, gathering old texts and recorded melodies from a tiny cassette dictaphone became her way of putting together the pieces of her life. And not a complete stranger to music, her grandfather, a classical pianist himself, had intuitively given her the name, “Nomzi”, which means “home” in isiXhosa, as though he knew how much she would come to need it. Now, music has chosen her and she continues her rehabilitation through writing and singing her songs.

Nomzi channels her creative power and imagination, from the choice of her hairstyle, piercings, the statement of her strictly classic black and white aesthetic, through to the contrast of her bare feet when she appears on stage. An observant audience member recently told her that she has a quirky way of conscious streaming her anecdotes on stage.

She sings without filters, connecting with her audiences with a melancholic soulful sound and a strikingly earthy vocal identity that is hers. A singer, songwriter, poet and painter of emotions, her neo-soul pop ballads are about love and resilience.

Already having delivered a stream of unique and intense concerts in Norway, her Norwegian band has newly welcomed a bassist as well as a Bosnian accordionist. Prior to her début, she has already performed in venues like the Oslo Concert Hall and The Noble Peace Centre. And “The Truth” is only the beginning of more music releases and concert tours.

Her first single is only the beginning of more music releases and concert tours, and it could not come at a better time, as we look forward to spending more time with loved ones, reflecting on a year that is almost done and contemplating what makes us feel at home. She is ready. Her music is ready.

What’s next? Release concert. Herr Nilsen. 26 February 2020! Ticket sales are now open! What are you waiting for?

I registered on WordPress 5 years ago. It is truly wonderful to see familiar faces from back when I started. How far we have come. It also feels good to welcome new faces here too. Love is everywhere you look, it’s true.

Jot down words on a piece of paper. Start writing and see what happens to your life.

Wishing you good health and all the best in 2019 🌸 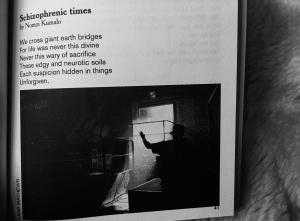 I am happy to announce that I was published in Ons Klynti; an independent South African cultural magazine. To have my poem Schizophrenic times printed in this issue is fabulous. The magazine is published and launched annually at the Oppikoppi music festival in South Africa.

Thank you so much for appreciating my work like this and thank you for your continued support here on WordPress. Read more about this contemporary online magazine @ Ons Klyntji

Feel free to catch up on my most recent poems by clicking here: Nomzi Kumalo Poetry Collection. Thank you so much 🌸

“Patience attracts happiness; it brings near that which is far.”
Swahili proverb 🌸

Will you notice how you speak to yourself, and watch how you treat yourself today? 🌸

Copyright © Nomzi Kumalo, 2014. Unauthorized use and/or duplication of all material without express and written permission from this blog’s author and/or owner is strictly prohibited. Excerpts and links may be used, provided that full and clear credit is given to Nomzi Kumalo with appropriate and specific direction to the original content.
NOMZI KUMALO
Proudly powered by WordPress | Theme: Ovation by AudioTheme.